Having a six pack looks great, there’s no question about it. And despite what many girls may tell you, that they “don’t care about muscles”, or they “don’t like big guys”, or that only “douchebags” have abs – this is straight non-sense. Having that ripped, Brad Pitt-in-Fight-Club body is very attractive to women. 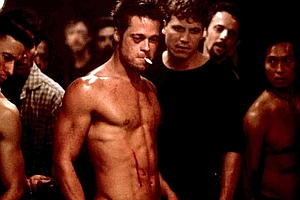 The question isn’t whether a 6 pack is attractive, the question is whether it’s worth the effort and for most guys the answer is no. There are 3 main reasons you shouldn’t try and maintain a 6 pack year round:

Why You Shouldn’t Aim For A Six Pack

1) It’s Too Hard To Maintain

Eating is one of the great pleasures in life. Sure it’s important to eat healthy, but life is short and you have to be able to indulge yourself from time to time.

The truth about six pack abs is that they’re made in the kitchen not the gym. And the law of thermodynamics does not play favorites. It’s not about “secret foods” or “secret training routines”, getting a six pack is about maintaining a caloric deficit, or in layman’s terms: eating less and moving more.

Let’s say you schedule three cheat/semi-cheat meals a week like I do. And even when you cheat, you’re still a good boy and don’t go over your daily caloric limit. That cheat meal is going to leave you bloated for the next day or two.

That means even if your bodyfat is low enough to have visible abs showing, they’ll be covered up for 5 days a week with water weight. In my experience, binging on carbs and sodium can leave me with as much as 4 extra pounds of water weight. If you’re a young guy this might not be a factor, but once you hit 30 it definitely will be, even when you take diuretics (I use Now Foods dandelion root).

Another thing to take note of is that the shredded fitness models you see are not natural. Besides being on test, tren and hardening agents like anavar. Most guys also use stims to keep their appetite down and their body in fat burning mode. The holy grail of fat burning and appetite suppression is the caffeine/ephedrine stack (legal in Canada) which I used to get lean (see pics below). It’s very difficult to keep a six pack year round without relying on stims.

2) You Look Small With Your Shirt On

If you’re on gear or are naturally tall and broad shouldered this doesn’t necessarily apply. But if you’re a natural trainee with average genetics, or a hardcore-small-shouldered-ectomorph like me, being super lean means you’re not going to look big with your shirt on.

This is especially true if you haven’t maxed out your natural genetic potential. Your natural potential is going to be 35 to 50 lbs. depending on your genetics. But let’s say you’re only halfway there and carrying 20 lbs. of lean muscle, people might not even be able to see that you workout until you take your shirt off.

In high school I was 5’10, 120 lbs. at approximately 12% bodyfat. After having maxed out my genetic potential and cut down to approximately 9%, I got up to 157 lbs. with a six pack (close to 40 lbs. of lean muscle) which had me looking like a lightweight UFC fighter.

I looked good with my shirt off, and got good results from using that picture on Tinder and good compliments from the girls I was seeing. But with my shirt on, since my shoulders are naturally so narrow, I just looked like a slim fit guy. In anything other than a tight T, you wouldn’t even be able to tell I worked out.

Compare that to my natural genetic potential with a flat stomach where I was walking around at 165 lbs. and it was a noticeable difference. With a flat stomach, that extra bit of bulk and a bit of water weight actually work in your favor with your shirt on. Also, at a higher body fat percentage you get to hold on to a bit of extra muscle. Without gear, you lose muscle the leaner you get. Cutting correctly can mitigate muscle loss, but it can’t stop it.

Unless you’re picking up girls at a pool party, or using your abs on your dating pics, a six pack is overkill. By the time she’s taking your shirt off the battle has already been won, and believe me, she’s not going to be disappointed that you don’t have a six pack. She’ll be happy enough to see that you’re an in-shape guy with a flat stomach, which puts you ahead of 99% of guys.

What You Should Aim For Instead

The move to aim for is a flat stomach at about 11% bodyfat. There a two key metrics that girls find very attractive, and once you have them you’ll know you’re lean enough:

Your face is your most important and attractive asset to women. Having your cheekbones and jawline show through are attractive features to women.

Every girl I’ve been with tells me how much she likes the lines around my hips. Part of this comes from being lean, the other part comes from leg press/v-squats and seated rows to build up the glutes and obliques.

Exceptions To The Rule

As always there are exceptions to the rule:

1) If you’re a personal trainer, fitness model or YouTube personality and plan on making a living off your body, then maintaining a six pack or at least a four pack might be the right move. And chances are, being a professional, you’ll prob be on gear and stims so this will be much easier for you. If my business was pure fitness instead of lifestyle, I would definitely be more hardcore in my approach and more ruthless with my diet.

2) The other option is a temporary six pack. This can be a good move to really separate yourself from other guys in situations like spring break or pool parties. But even more useful is getting cut for your online pictures. Having visible abs is a great selling feature online. And don’t worry, the girls won’t complain that you’re only a fit guy with a flat stomach by the time you meet up with her. As we covered before, by the time she takes your shirt off, the battle has already been won.

Get fit, get lean, but don’t kill yourself trying to get too lean, the rewards aren’t worth the effort.